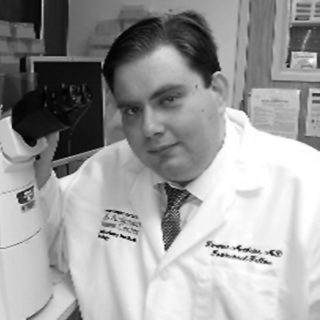 Dr. Dimitrios Matthaios was born on 1982 in Thessaloniki, Greece. He speaks English, French and Italian. He graduated from Democritus University School of Medicine (Alexandroupolis,Greece) on 2006. He obtained his PhD with honors on 2013 from the same University regarding DNA damage response and NSCLC. Moreover, he obtained his master’s degree on Translational Research at Molecular Biology and Genetics from the Department of Molecular Biology and Genetics of Democritus University of Thrace on 2016 in his effort to further focus on translational research. Dr Matthaios has been awarded with several scholarships and grants in Greece and worldwide (ESMO and ESO) as a result of his research. Dr. Matthaios is an ESMO board certified Medical Oncologist. He also has a strong academic orientation, having a teaching experience as a professor of Pathology, Pharmacology and Acute medicine in high institutes in Greece. He participated in over 80 publications and presentations in National and International Congresses. His research interests are focused on: Oncology (solid tumors) and Molecular Biology (DNA Damage Response, Epigenetics). He is member of various international scientific societies regarding Oncology. He served as a president and member of various national congresses regarding Oncology and Bioethics. He is Associate Editor of Cases Journal and Journal of Medical Case Reports (indexed in Pubmed). He was member of the general assembly and many committees in Democritus Medical School. He participates as sub-Investigator in many International Clinical Trials. He participated in over 200 courses, seminars and congresses regarding Oncology. He was President and member of organizing committee in several national Oncology congresses. On 2014, he has been granted from ESMO for a clinical unit visit at Istituto dei Tumori, Milano in order to broaden his research plans on Lung Cancer. He participated as invited Professor at the Master Course of Clinical Pharmacology and Therapeutics organized by the Medical School of Democritus University of Thrace. He was also member of the teaching faculty of the International Diploma of Molecular Oncology held in Quito-Equador, where he had the opportunity to teach Latin America Oncologists. He has a strong participation in volunteer projects and actions for the public in national level regarding prevention of cancer, first-aid, prevention of diabetes and hyperlipidemia. Dr. Matthaios has worked as a Post-Doc Fellow at the Department of Genitourinary Medical Oncology of MD Anderson Cancer Center at Houston,USA where he focused on prostate cancer research, having been implicated in several drug development projects. On 2018 he established the Rhodes Oncology Department at Dodekanisa-Greece, where he is the Director till now.